This is not a swan story; its about a duck breed that grows up, and stays ugly.

On the walking path each morning, I encounter a few Moscovy ducks, whose beak and head area make JP Morgan's nose look hansom.  The bright red, whatever it is seems to be taking over its head, like the thing in "Alien," is what I call ugly.

Anyway, everything and everybody needs "love", and I witnessed a pair of these ducks this morning attempting to have a go of it, or, at least, he was.  I observed them, in particular, the male, try all his moves.

First, he approached her with his tail feathers "twittering" in a circular motion.

He danced around in front of her, making circles, while keeping the tail twitter going.

He added another ball to his juggling act, flapping his wings, spinning around in a circle, tail twittering...

Finally, he kept doing this circus act:  unable to just beat around the...(I was, but I'm not going to say it), he attempted to nuzzle her not as ugly as his, nose.

She stared, quacked, and walked away.

He continued saying "Yes", but she just said "No." 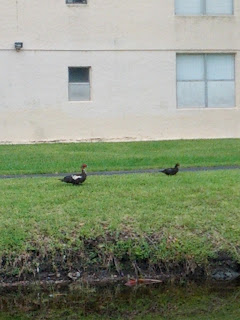