I Should Have Stayed Home 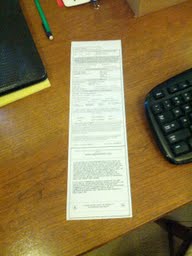 The new municipal ticket in town.  They don't make them like they used to.

One of those days, Tuesday was.  I'm not a firm believer in bad things happening in "threes", however:

Ever have an idea pop into your head causing lack of attention?  (I heard all of you daydreamers and ADHDers say yes).  This was an idea for a screenplay of "Ark" (working title:  "Ghost Games") I've been struggling with.  Out of the dream, as the chute returns my deposit ticket.  Off I go back home.  A few miles down the road, I'm stopped waiting to turn left when the light changes.  Ever creep into the turn, slowly, eyeing the amber, opposing light?  I've done it dozens of times at this intersection.  This time was one too many.

Looking forward, and not in the rear view mirror where the police car was behind me, I made the turn, and waved to the deferring motorist in the opposing lane.  A block later, I did look in the rear viewer, at the flashing police lights.

I sheepishly produced my license, but not before I made him notice my Police Benevolent Association  badge, next to it in my wallet.  He was a nice, polite cop, I'd say in his mid to late twenties. I needed to get the registration and insurance card from the car docs binder, which was in the trunk.

I cleaned out my trunk a week before, forgetting one of the bags contained the car docs binder at the bottom.  After explaining to Officer Nice Kid the registration and insurance cards were at my house, he asked me to sit in my car.

Shit.  Worse case:  not deferring to opposing traffic is a fine with points, plus tickets for not presenting the registration, AND ditto for no insurance card.  Around $500. for not looking in the rear view.

However, Officer N K returns with my $180. ticket for no registration.  He waved the points and insurance card tics!

Thank you PBA badge... but the day wasn't over yet.

2.)         The phone rings two hours later.  It's my bank branch.  After some sleuthing, they determined I left a cashed check in the drive-thru cylinder.  The honest next customer returned it.  My eyes failed me again.  Back to the bank, where my profused apologies are returned with snickers.  Driving home, through the same intersection where I just got the ticket (rear viewing and deferring this time), I started to let one of my little demons convince me I was an idiot.  I let him go with a 'stupid is as stupid does' counter, but I wasn't done yet.

3.)          My wife was on her way out the door when I returned from the bank.  She asked if I wanted the house alarm on.  I said yes, I was going to take a nap to minimize any more trouble for the rest of the day.  I dozed for about an hour, got up, and noticed I didn't fill the bird feeder off the deck.  I opened the sliding door, and was met with the piercing sound of the alarm, screeching 'intruder, leave immediately', several times before I could get to the nearest keypad (by the side door, half a house away).  Waiting by the phone for a minute or so for the alarm company to call, I lamented, again, not having a keypad by the back door slider to the deck.  I lamely told the dispatcher I was just 'testing' the system.

That was it for the day, no #4 to add here, but 3 events were enough for an expensive, stupid, headache.

Posted by Unknown at 3:30 PM No comments: 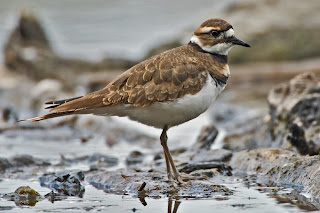 A few days ago, I was reminded of the upcoming Mother's Day by a Killdeer sitting on her nest.  The Killdeer is a shore bird who has been misplaced by over development, so they find homes farther inland, like our retention pond.  She was just off the walking path, in plain view on the mulch surrounding a small tree, less than 4 feet from me.  I walked slowly past her, she not moving a feather, and I said softly, "good morning."

The next day as I approached the nest from a distance, I saw three little chicks scurrying about in a panic.  I'd done a little research to find out killdeer chicks are "precocial" which means "ripened beforehand."  They know the meaning of "hit the ground running."  The same root gives us the word "precocious", the meaning of which every mom knows.

As I got closer, I noticed mama was on the left side of the path, while the chicks were squawking, as if looking for their heads, on the right.   I didn't want to scare them more, yet I still wanted to resume my walk, and not get a peck on the head from mama.  She gave me the "broken wing" act, trying to draw me away from her chicks.  I slowly circled reasonably far away from the chicks, keeping one eye on her beak.  As I passed by the four of them, mama seemed to chirp curse at her three babies for straying.  They came together, one behind the other, and she led the way into the bushes, screeching at them the whole way.

It's always nice to see a mother who cares.

So all you good moms on my list who care:  Happy Mother's Day!

For the rest of you, who were precocious some or most of the time, tell her thanks for caring.