I hit the mute button every time I see one coming.  Did you notice the disclaimers at the end of most of them are longer than the benefit pitch at the beginning?

The newest one about the testosterone liquid which is applied like a deodorant to your underarm is what pressed the blog button in my head on this subject.  Like the other products, it gives a long list of side effects which can harm or kill you, but hey, c'mon, give us a try anyway!  It's only your life.

The other thing which occurred to me is most of the schpeals could be placed "as is" on Saturday Night Live and get a bunch of laughs.

Don't you think there's something seriously wrong with the FDA to even allow these drugs to market with all these downsides?  I get the feeling some of these companies KNOW the sizable risks beforehand, but they spent all this money on R&D which they have to recoup.  So they send a Tsunami of Ads and product into the marketplace before the shit hits the fan.

I'll give you another example of insanity in the drug market.  I take Armour thyroid, a natural hormone from pigs, which is a good match because some of my friends think I'm one also.  Armour thyroid is not covered under my Medicare drug plan, however the synthetic, Synthroid is.  Synthroid cost much more, and has many more severe side effects.  Another head scratcher.

The best advice to be given is one none of us can adhere to:  don't get old or sick.
Posted by Unknown at 1:12 PM No comments:

The key word here is "Chamber."  There are so many large scale magic acts, with oft described smoke and mirrors, or fog, lights, fireworks, numerous large budget items to wow, and make it easier for the trickster to trick you.

Not so with Steve Cohen.  He describes his act as "a demonstration of modern conjuring," but it really is classic old school:  a minimal amount of props, ie, a couple of decks of cards, a hat, etc, all plied within 10 feet of my eyes, and he had me scratching my head after each trick.

How did he get that brick under the hat?  How did he take rings from three separate audience members, link them together, then un-link and return them?

He read people's minds.  How many times have you heard "there's an explanation for everything?"  In Steve's case I'm not sure there is!

Here's the thing.  There were about 60 people in the room.  I spoke to several of them afterwards, and none of them had a clue as to how he did ANY of his tricks.

Steve and yours truly.

Also, if Steve decided to leave out the tricks, you would be admirably entertained, his timing and sense of humor were impeccable.  As he said, he's a third generation magician; his grandfather knew Houdini.  He's had a lifetime to perfect and establish himself as a one of a kind, and he has.

If you're one to savor the unique things that life offers, Steve Cohen will have you telling your grand kids about him.
Posted by Unknown at 8:03 PM No comments:

That's my 88 year old father.  Why?  Because he showed me how to live life to the fullest.  Actually, the root of the word, held, in German, means "hero."

I think a good part of the way he's lived  was being a member of "The Greatest Generation," as Tom Brokaw put it.  When you're 18 years old, on a Merchant Marine ship that gets torpedoed near the Straights of Gibraltar, while you were climbing a ship's ladder, almost missing the rung as the bow of ship was lifted out of the water from the blast, you don't take the rest of your life for granted.

When you're assigned shore duty while waiting for the ship to be repaired, anxiously return home  across the Atlantic without incident for a leave, then are reassigned to a post in the Army in the Philippines, learning afterwards the ship you were on was torpedoed again and sunk, YOU DON'T TAKE THE REST OF YOUR LIFE FOR GRANTED!! 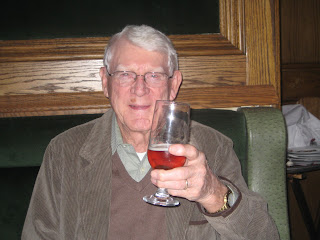 I'm pretty sure he got the message the first time, but God was probably making sure he did.  Thank you, God.  If it wasn't for You, I wouldn't be writing this.

After the War, marrying my mother, and having me, he set about his plan to have a house at the Jersey shore, and a boat.  Having grown up in Edgewater, a sleepy town on the Hudson River, the Atlantic Ocean was his compass for which his life journeyed, and I was along for the ride.  To do what he wanted (have a house and a boat), he would work two or three jobs, with me tagging along as an apprentice of sorts.  He was literally a "jack of all trades."  The best part of all this for me was, not knowing any better, I thought I was the richest kid in the world, and the happiest with that ignorance.

There might have been other times, but as a son growing up and even now, I  recall my father being anxious about his life only two times.  Both had to do with the aging process.  His father died at age 60, and as my father approached that age, he seemed depressed.  I didn't  pick up on it at the time, but when he was in his mid 60's, he confessed to me that age 60 bothered him for that reason.

"Well," I said, " It looks like you have grandma's longevity gene."

That pitch has been over the plate, until now.

You see, his mother lived to be 90, and we're approaching that milestone.  Just the other day, as I was taking him for his pre-op visit to the hospital, preparing to remove the melanoma on his upper lip (you can see it in the pic), he said this,

Not usually quick witted, I mustered this answer in a flash,

"At least 12 years!!  Don't compare yourself to grandma.  She was very sedentary, played cards (usually solitaire) most of the day, didn't eat right, and generally didn't take care of herself.  You've led an active life, and you still do, thanks to your personal trainer, Candy Sue (my baby sister, a long haired chihuahua).  You've had plenty of fun in the sun; so what's the trouble of getting a couple of early stage melanomas whacked off?  It was worth it, don't you agree?  You have several good years left."

He bought this pitch also, and I wasn't lying.
Posted by Unknown at 12:15 PM 2 comments:

The Last Straws at the Java Moon Cafe

To and from our son and daughter in law's place in PA, there's the Java Moon Cafe on the south side of Route 537, just west of the Jackson Outlet Mall.  If you're driving west there's a bunch of trees which hide it's set back location from the road, so go slow.  If you're heading east, it's much more visible.

Either way, you should stop, for breakfast, lunch, or dinner.

Now, you're not going to find the building structure in Architectural Digest.  It has a simple, log cabin feel to it, and it's not too large, but all the goodies are inside!

After passing it several times, and wondering how the food was, my wife and I took the plunge yesterday, on her Birthday.  The night before, I was surfing to find lunch spot, as we were traveling to Upper Freehold that afternoon.

A 22 food rating from Zagat popped out at me (afterwards, I'd score my own rating a couple points higher).  Being a writer, the old adage about book and cover proved to be right again.  We both had a sandwich and salad platter, mine being a shrimp po' boy, matching the really good ones I've had at Henry's in Wilmington, NC.  The salad had mixed greens, and the right mixture of olives, jack cheese, pepperoncini, carrots, onions, and cukes with a mild, blended dressing.  It was just enough (we don't overeat anymore, anyway) and fairly priced.

What put Java Moon over the top for me was the extra long straws in the tall water glasses.  I sighed at the waitress,

"I haven't been able to find these straws anywhere."  (I nearly had an argument with an assistant manager at Wegmen's).   I needed them for my extra tall glassed, Zing Zang Bloody Marys, which with a standard straw, your nose and lips have to squeeze into the top of the glass to slurp the last tangy drop.

The waitress, when she brought the check, put two straws on top of the check holder, saying,

"These are so you'll remember me while sipping your next Bloody Mary."

I was appreciative.  Really.  But I wanted more straws!!

On the way out, I queried the owner if I could buy a handful of straws.

"No, but you can take the last few I have," as he handed over about ten straws, with the box from the manufacturer.

"Thank you,"  I said, and stuffed a buck in the tip jar on the counter.

Go to the link below to see what I'm talking about.

Posted by Unknown at 9:22 PM No comments: