With the flu season now gearing up to run over as many immune systems as possible, and the media attention showing numerous arms being needled with the vaccine, I had a flash back to my elementary school days in the 1950's, when the Salk polio vaccine was being targeted to rid the world of THAT scourge.

I'm going to say I was in third grade, in 1956, when I received the first of three shots that year.  The early 1950's were a trying time to be a parent of young children.  The cold war, A and H bombs, and the dread of a polio outbreak every summer had everyone knowing the meaning of the word, ANXIETY.  A national sigh of relief accompanied the "safe to use" announcement of Dr. Jonas Salk's vaccine.  The word Anxiety just had to be thought of with a capital "A", since now only bombs and war were a worry ( a few years later, "Dr. Strangelove" would help us to 'stop worrying, and love the bomb', lol.)

Seriously, and sadly, I remember that time, after my year of kindergarten, when I had made friends with another young boy in my class. After summer,upon returning to school for first grade, I was told he was gone.  Died.  Went to heaven.  Unforgettable trauma which couldn't be sugar coated.

Fortunately, for the rest of us who were lucky to survive, there was a happy ending, and the point of this story.

Flash ahead to 1956, our relieved parents were told the March of Dimes was sponsoring an immunization program for elementary schools across the country.  Never liking needles (even to this day, I have to lie down for blood work), I vividly remember lining up in the hallway outside the school auditorium, passing through an anteroom to be swabbed with iodine (not clear alcohol, why, I know not), stabbed with a needle which looked like a harpoon to me, then ushered to a seat in the auditorium to rest, and be observed for ill effects, I presumed later.  What happened next was that era's equivalent of a viral you tube video.

From our vantage point in the resting area, we who had already been shot, could observe those who were about to enter the anteroom, and of course we would heckle them about 4" needles, the stinging and burning (half true) afterwards, and the PAIN!  We all became two bit actors and actresses (yes, then there was still a distinction) at the expense of the little lambs yet to join us.

Harry, a popular kid in the class, was among those being heckled, which he seemed to take in stride.  However, we noticed Harry wasn't coming out of the line to join our chorus, and the speculation quickly escalated.

"I'll bet Harry fainted, the big baby," was offered to provide some more chuckles.  After about 20 minutes, still no Harry, and the mood turned from laughter to dread.  Quickly, the comments spread like an epidemic among us...

"He must have hit his head, and got knocked out..."

"He could have had a reaction to the shot..."

We were full blown out of control when the tall, Lincolnesque principal with a baritone voice silenced us,

One from our now quiet choir of church mice chimed up,

A nurse at the Principal's side chimed in,

"He's fine.  He coughed before he got his shot, so I took his temperature, and he has a slight fever, so we sent him home.  He'll have to go to his doctor for his shot when he gets better."

She rolled her eyes at the Principal, and he managed a taut, pursed smirk; the closest any of us ever saw him smile.

We all, at the same time, felt relieved, and stupid.  However, we managed the happy giggles soon after.

Thank you, Dr. Salk, for not accepting royalties, and making the vaccine available to rich and poor alike. 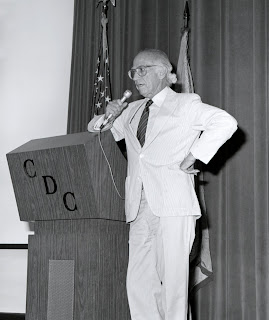